Mention Mustang and immediately hearts and minds excite to a modern day sports car that has a rich heritage, not only in the United States, where it originated but right around the world. While America’s most popular sports car for generations progressed into this decade with the latest model, Ford took a rather surprising direction in creating the Mach-e, an all-electric SUV coupe, sporting the iconic Mustang badge! 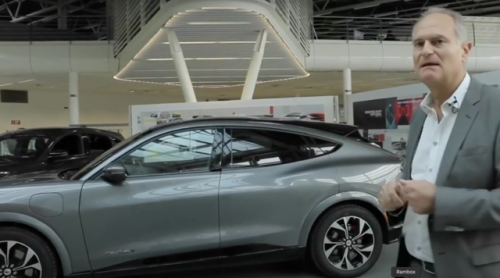 Thanks to the Autostyle Car Design Competition Digital Edition Workshop Series, Part 4 presented by Claudio Messale from the Ford Design Centre in Cologne, Germany explained all; the reasoning, the design challenge and the serious commitment to the project. Following Claudio’s introduction, a most interesting video got the viewer’s pulses racing with the historical footage shown that chronicled the various eras of the Mustang and included interviews with proud owners of differing generation models, not forgetting the star roles the legendary coupe played on the ‘Big Screen’, with Steve McQueen in Bullitt, the most notable, of course. One particular owner called it the ‘Original American Super Hero’, thanks to its power and performance, …. whatever about the looks of certain variants! Comments by Bill Ford, Chairman of the Ford Motor Company and Jim Farley, the recently appointed Ford CEO both fully endorsed the project and that the zero-emission Mach-e – “Is what Ford stands for” – and harked back to the company’s founder Henry Ford, who heralded electric mobility technology over 100 years ago.

Actually, it was Jim Farley that keenly pushed to make the new car a Mustang derivative, while ensuring that was ‘not to become a science project’.

While the complexity of the design was described as ‘risky’ the co-operation within the company “got our people excited”, on both sides of the Atlantic – Detroit and Cologne. “Make it Mustang,” said Jim. “Capture the magic of the car.” He challenged the design teams “to show us what you’ve got!”

Indeed, the collective talent did shine, as the end result proved. Having the privilege of seeing the prototype vehicle some 14 months, before the official launch at a special Ford Press Event in Amsterdam. One and all there were capsulated by the concept.

Early descension in the camp arose. Some were adamant that the ‘Crown Jewels’ remain unspoilt; turning a two-door 2+2 coupe into a four-door SUV and make it electric, was unheard of, like changing religion! Gradually, as the project gained traction, the naysayers turned around and “the new horse in the stable was accepted”. That said, the design teams redoubled their effort all round is assuring the classic ques and styling elements from present and past Mustangs were evident. “It looks like it’s moving, while standing still,” enthused Claudio, who spent his early career at the Italian design house Ghia, which had strong links with Ford.

Similarly, the interior prototype linked past with the future but with much more space created. “This is a ‘we’ car to be experienced by all. The Mach-e features key Mustang like lines but more  practical, more family oriented,” he added, citing that many Mustang owners’ needs have changed over the years.

For those who wish to express more ‘free spirit’ from the new model, Ford has gone one step further with the development of the high-performance Mach-e GT version.

Claudio explained that the initial idea began over three years ago. With Ford’s global team involved, a new platform had to be designed initially to accommodate the electric powertrain requirements. It had to have a strong personality, carry instant appeal and successfully compete against existing and future models in the crossover segment. In describing the numerous design traits. Claudio highlighted the coupe-like silhouette, having double luggage space (under the bonnet and in the boot) and featuring a muscular, athletic stance and without door handles!

The interior, he stressed; “is a dream to come true”, full of openness, user friendly focussed. From the B&O sound system, the 10.2” touch screen, highly efficient connectivity through the latest Ford SYNC system, the driver and passenger experience offering is exceptional.

Before the end of the session, movie and TV celeb Idris Elba enthusiastically outlined details of the Mach-e GT with its 465hp/830Nm driveline (compared to 337hp/565Nm from the standard model), Claudio emphasised the significance of 360º CAD sketching, which hugely help create the new model – Visually picturing the new car’s outlines on screen “as if created from within” – “Providing a holistic view” – ‘Just like a video game”. “The designer becomes immersed in it,” he added, “complete picture forming from ideas” – and become an essential tool for all car designers at every level.

While admitting that the Ford S-Max at the time was a most rewarding development project in his career, with its European Car of the Year Award in 2007 to boot, the new Mustang Mach-e is indeed ‘closest to my heart’ he said. A sincerely modest man, with pride in his eyes! Jarlath Sweeney